English Plum Pudding aka Christmas Pudding is one of those super delicious, super impressive and super easy desserts. To Americans, the name can be fairly confusing because its not a pudding, its a cake…and there are no plums in it. You see, in England, pudding is a generic word for all sorts of dessert, and this particular dessert has undoubtedly been made many ways over the decades. Did it contain plums? Maybe. Or more likely plum refers to the raisins.

The first time I tasted plum pudding, I thought “where have you been my whole life?” I was already full of Christmas food and I was just going to have a sliver…you know… for the experience. Next thing I know, I’ve eaten an entire piece. No regrets.

So let me tell you why this cake is so freakin’ fantastic.

And yet, for some of you, I know that this dessert is a hard sell. After all, let’s be honest. This is a fruit cake. There, I said it. And I’m going to say some more. It is better after it ages. And it has raisins in it…lots of raisins. And for many people I know, that’s a deal killer right there. When did the raisin fall out of favor anyway? But I digress. I’m asking you to set all that aside and put a little faith in me and Christmas and give this unique dessert a try.

I am posting this 14 days before the big day, but if you want to make your own plum pudding, hurry up. Unfortunately, it may already be too late, if you can believe that. Here’s why. Plum pudding, like all fruit cakes, improves over time. I’ve heard stories of cakes made one year for consumption in the next. So if you want plum pudding for Christmas, you should make it yesterday, but no later than one week before Christmas so head to the store. 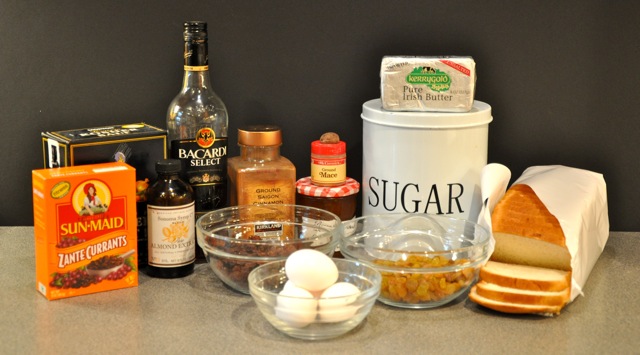 SPECIALTY EQUIPMENT: 8-cup capacity Steamed Pudding Mold & small rack that fits into a tall stockpot. If you don’t have a steamed pudding mold, you can use a small bowl, but a pudding mold is inexpensive and pretty easy to find at a kitchen store or online. You will also need a small rack to keep the mold off the bottom of the pot. I struggled with this for years until I finally found a small rack like this one in an Asian Supermarket. Whatever you devise, your goal is to keep the metal of the pudding mold (or bowl) from making contact with the very hot metal stockpot bottom. Instead, you want the water to surround the bottom of the mold while it steams.

Tear bread into pieces and place in the bowl of a food processor. Pulse to form rough crumbs. Empty the crumbs into very large bowl.

SIDE NOTE: Obviously this cake was made long before the invention of the food processor and you could chop all this by hand, but processing is soooo much easier.

Add the raisins and currants to the food processor and process until finely chopped, but not turned into a paste (that’s too much).

Turn the fruit out into the bowl with the bread. Put all of the other ingredients into the food processor and pulse to mix.

Pour all that over the bread and fruit. Stir to thoroughly mix. The batter will be quite wet.

Butter an 8-cup capacity steamed pudding mold (or medium-size bowl). Pack pudding into mold and top with a parchment round on surface.

Cover tightly either with the lid on the mold or with a plate and/or aluminum foil.
Place on rack in a deep stockpot. Pour water into the stock pot to come 1/3 of the depth of the mold (not in the mold, you understand, but surrounding it). Bring water to a simmer. Cover tightly and steam for 6 hours. 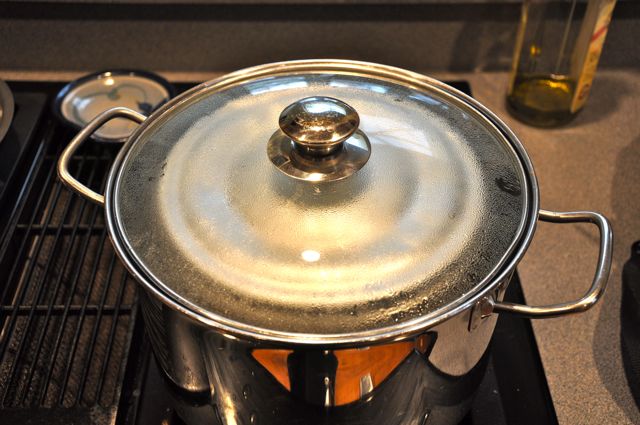 Do some laundry, watch some TV, check your blog. Go for a walk around the block even. Just check from time to time to make sure that your water has not evaporated below the 1/3 full level and add more if it does.
When six hours has elapsed, remove the mold to a rack and bring it to room temperature. Cover tightly and store in the refrigerator for a week, or even better, a month…or dare I say…longer. It keeps.

When you are ready to serve, make the hard sauce. Hard sauce is basically a boozy buttercream. Just beat the powdered sugar and soft butter together until fluffy. Then beat in the salt and booze. Transfer to a serving bowl and chill. Later, when you slice the pudding, you can serve the hard sauce on the side letting your guests decide how much they want.
Plum Pudding should be served warm. To unmold it, bring it to room temperature again and warm the mold slightly to loosen. In fact you can reheat it completely in simmering water in the mold. OR perhaps even easier, turn the pudding out onto a deep plate, cover the pudding with vented plastic wrap and reheat it in the microwave until very warm.
For the big finale, you set it on fire. The fancy term for this is flambe.

NOTE: Make sure that both the cake and the booze are pretty warm/hot or the flambe probably won’t light.

WARNING: Make sure that the person in charge of the flambe isn’t also lit. This is fire after all and someone who is a little drunk on the Xmas spirits might accidentally set their kitchen counter on fire…Yes, that was me. Oops.

Anywho, here’s how to do it. Heat 1/2-1 cup of hot brandy or rum in a saucepan. Light the alcohol on fire and then carefully pour the flaming liquid over the cake.  Here is a good example of how this should be done.
Turn down the lights and have your camera ready people. That’s a Norman Rockwell moment right there.
Here’s Mine. A flaming pudding photographed in a dark room looks a bit like a UFO. Merry Christmas!