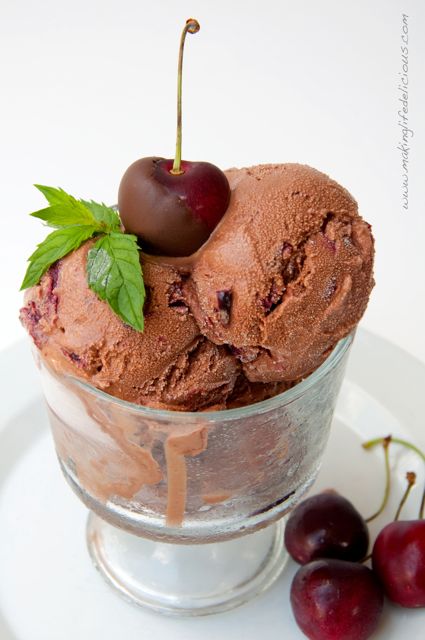 Serenity was the word of the weekend when I found myself alone for 48 hours in my newly cleaned air conditioned house. So much time, so little responsibility, what is a mother of two to do? Well after I worked out at the gym at my leisure and ate my favorite lunch, I found myself scouring the cabinets and the fridge for something yummy to make for meeee. Yes, mine mine all mine.

What I found was a big bowl of firm ripe bing cherries and an idea that had been floating around in my head since last summer. Roasted cherries in ice cream. I first heard about the ideas of roasting cherries from my Aunt Karen who is a great foodie and a great person. It did sound intriguing so I put it on my list. Yes, I do have a list…eight pages single spaced, but I digress. It was clearly also on my mental list because looking at the cherries in my fridge brought the thought right to my frontal cortex.

I love the versatility of ice cream. You can make it with a variety of dairy products from milk to cream. You can make it with eggs like Fresh Mint Chocolate Chip Ice Cream or without eggs like Pumpkin Spice Ice Cream. In fact, you almost always have what you need in your cabinet and/or your fridge to make something seasonal. I even make ice creams that don’t require an ice cream maker at all like Chocolate Hazelnut Blender Gelato or Bailey’s Chocolate Banana Ice Cream.

Over the years, however, I have become quite fond of ice cream made without egg yolks because they are so easy. The resulting ice cream is still very rich, but I also can tell myself that it is slightly more healthy. Yes, I can believe that I’m making something wholesome as I stir in the half-and-half, but let’s move on.

Anywho, I found this recipe for something described as the “Darkest Chocolate Ice Cream in the World” and thought…alright I’ll try it. Even looking at the recipe, I had trouble buying that description, but what the hey. I changed the formula a bit to accommodate what I had (half-and-half in place of a cream/milk formula) and my taste (Jeni, where was the vanilla?) and, of course, added cherries.

The result? Certainly not the darkest chocolate ice cream in the world, not even close, but chocolate deliciousness all the same and an ice cream that I would recommend. 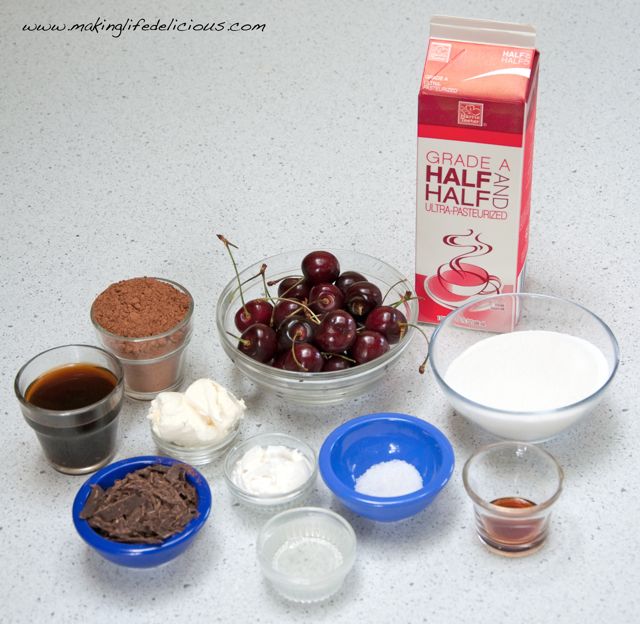 Bring cocoa, brewed coffee and 1/2 cup sugar to a boil in a 2-qt. saucepan over medium high heat; cook for 30 seconds stirring constantly. Remove from heat and stir in chocolate and vanilla until smooth.

Whisk chocolate mixture into ice cream base. Bring to room temperature (an ice bath will speed this up) and the cover with plastic (so it touches the surface) and chill for 4 hours or overnight. 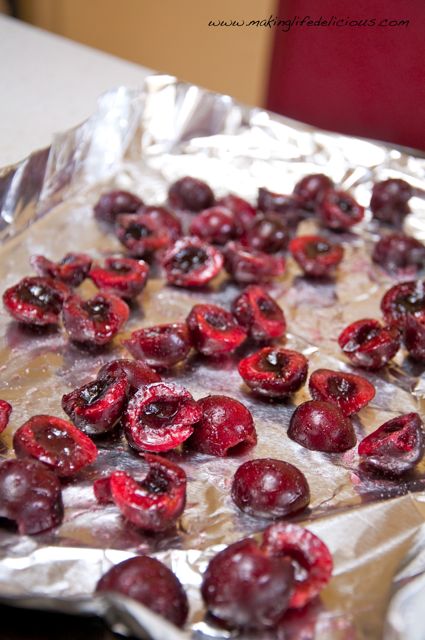 To prepare the cherries, toss the fruit with 1 tablespoon of sugar.

Roast in a 425 degree oven for 15-20 minutes until soft and glossy. Leave as halves or chop roughly. Chill the cherries at the same time as the ice cream base.

Four hours later (or even better the next day), pour mixture into an ice cream maker and process according to manufacturer’s instructions. When the ice cream is like firm soft serve (it won’t get harder than that), add the cherries and process for about 30 seconds. Then transfer ice cream to a chilled container (a container with hard sides works best for scooping later) and freeze until set. 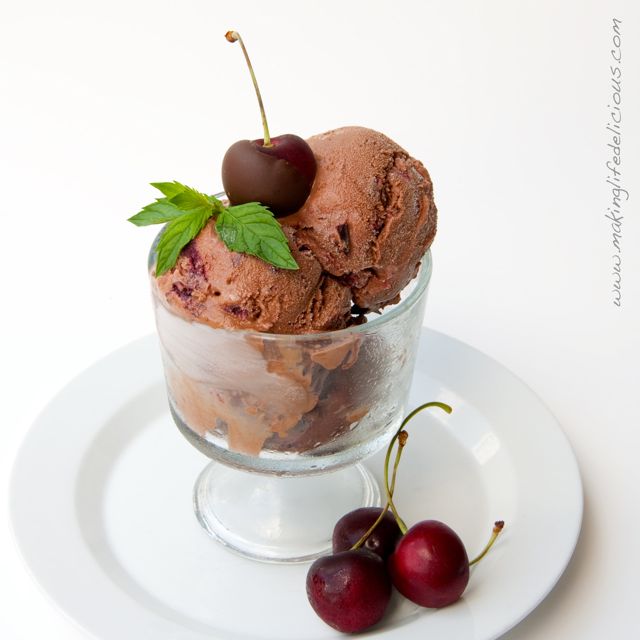 Next on my ice cream wish list…Salted Caramel.